For the occasion, ISPO Past Presidents Rajiv S. Hanspal and Friedbert Kohler wrote an article on:

The History of ISPO and Assistive Technology

The International Society for Prosthetics and Orthotists (ISPO) is sometimes misunderstood as representing only prosthetists and orthotists. ‘P’ and ‘O’ stands for Prosthetics and Orthotics and, for 50 years, ISPO has provided an effective platform for the exchange and communication on all aspects of the science and practice associated with the provision of prosthetic and orthotic care, rehabilitation engineering, and related areas. Membership is multi-disciplinary and thus includes professionals of ALL disciplines with an interest in the subject and the service. Forty percent of ISPO members are prosthetists or orthotists, 25% are medical doctors, and the rest include therapists, engineers, and other disciplines. The 10 founding members were orthopaedic surgeons, engineers, and prosthetists/orthotists (Figure 1).

Click here to view the video messages from current and past ISPO leaders.

Click here to view the messages received from ISPO's partners.

Today the society has over 3,000 members in over 100 countries. The mission is to improve the quality of life for persons who may benefit from the rehabilitation practice of prosthetic, orthotic, mobility and assistive technology. The last 2 words could be overlooked, probably because of the original name of the society. 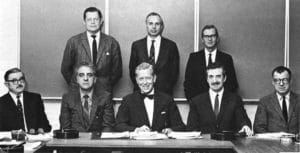 ISPO has often found itself at international working groups, invited ostensibly to represent Prosthetic and Orthotic services but frequently as the only multi-disciplinary society. ISPO has a large number of P&O professionals as members, and it had been suggested that we become the official professional organisation representing P&O as a single discipline. After all, ISPO has led the development of international standards for P&O services and the Educational Standards and remains the lead global organisation for P&O education. This subject was discussed at length by the International Board recently in Kobe (2019), when it was decided that the multi-professional nature of ISPO membership is most precious and should not be lost or compromised under any circumstances. It was felt that consideration could be given to the formation of a P&O Council to represent the professional interest of prosthetists and orthotists as a professional discipline, as a semiautonomous and autonomous body within the overall structure of ISPO. Work is already being done by ISPO (e.g., recognition as a distinct profession with ILO).

All professional organisations have the user, client or patient at the centre of their work. ISPO has always believed this is the essence and prime purpose of their work. This was well illustrated in 1970 when ISPO was first formed. The Charter was signed by 7-year-old Ulla Anderson, a polio patient of the Society’s first President, Knud Jansen (Figure 2). 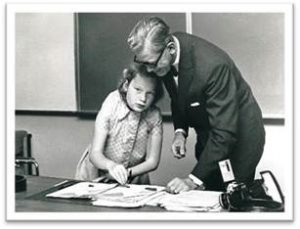 One of the authors (Rajiv Hanspal) had had the honour of working as Registrar to Professor Murdoch, who at the time was the President of ISPO. He remembers the orthopaedic workshops where technicians custom made assistive devices; most happened to be orthoses as this was the greater need at the time. This set-up was common in most well-established orthopaedic departments, including that of Dr Knud Jensen in Denmark, considered ‘the founder’ and First President of the Society. It is with the vision of establishing a society of all professionals with an interest in assistive devices like prosthetics and orthotics that they formed ISPO in 1970. Today ISPO has a network of over 70 National Member Societies.

While the first two Presidents (Knud Jansen and George Murdoch – sitting 3rd and 4th from left in Figure 1) were both orthopaedic surgeons, the third President was Anthony Staros (sitting 2nd from left) who was an engineer graduate from Stanford University, USA. In his Hall of Fellows address at Stanford, he said - I first started in "Assistive Technology" in 1950 by working with Eugene Murphy at the U.S. Veterans Administration in New York. The emphasis at the time was on World War II and Korean War wounded veterans, mainly amputees. … Both engineers, conducted assessments of the existing orthotics hardware and processes then available for providing orthoses. … assessed biomechanics associated with fitting people with orthopedic disabilities. I didn't "get into" the assistive technology field; it grew up around me and I hung on to grow with it.

Anthony Staros was proud to have contributed to the formation of ISPO in 1970, the same year of the inauguration of the Academy of Prosthetics and Orthotics in USA. His personal statement reflects the story of the development of ISPO in Assistive Technology and Rehabilitation. ISPO has always been involved in Assistive Technology, a field that continues to grow with advances in Technology and with the increase in global need for this service.

While Consensus Conferences on Standards in Amputation Surgery, various clinical conditions requiring P&O devices (e.g., stroke, cerebral palsy), and the development of WHO international standards for P&O services and the P&O Education Standards was expected of the society, ISPO was also responsible for development of Wheelchair Standards (with WHO and US Aid) in 2007. On the occasion of the 21st World Congress of Rehabilitation International (Quebec, 2008), WHO, the US Agency for International Development, the International Society for Prosthetics and Orthotics, and Disabled Peoples' International launched an important new document: Guidelines on the provision of manual wheelchairs in less resourced settings. https://www.who.int/publications/i/item/guidelines-on-the-provision-of-manual-wheelchairs-in-less-resourced-settings. This was a landmark step in wheelchair services that stands as a significant example of ISPO being involved in more than just prosthetics and orthotics.

In the current global initiatives for AT, ISPO, as expected, has significant involvement and makes considerable contributions. With its global network, multi-professional membership, a 50 year history in AT and an established practice of multi-professional approach within its global network, ISPO is in a unique position to lead in the development of a Consortia of multi-society organisations to bring appropriate global projects to fruition. When considering any project or program, there is no partiality to any single professional discipline – the outcome and success of the project remains paramount. The public perception should also remain neutral.

Thus, over the last 5-6 years, ISPO has worked closely within the framework of the United Nations, the WHO (including being significant contributors to the GATE [Global Cooperation on Assistive Technology] initiative, international professional organisations and international NGOs providing assistive technology and rehabilitation services including ICRC, HI and others. ISPO has made substantial contributions, including development of the WHO Prosthetic and Orthotic Standards and contributions to many initiatives for developing rehabilitation and assistive technology services with the WHO in order to achieve the United Nations sustainable development goals. Overall these activities contribute to the global implementation of the Convention on the Rights of Persons with Disabilities and implementation of the Rehabilitation 2030 agenda, as well as developing and implementing the AT Scale and AT 2030 agendas.

The service developments have been appropriate to the context and needs of the regions of the world where they have been applied. This may vary depending on the availability of local resources. It was therefore felt that the approach and support should vary accordingly. To address this, ISPO developed Regional Groups/Councils which provide better access to local knowledge and services for improved efficiency. This has improved the ISPO Global Network.

ISPO continues to strive towards its goal as stated in its mission statement:

To improve the quality of life for persons who may benefit from the rehabilitation practice of prosthetic, orthotic, mobility and assistive technology

This covers all aspects of Assistive Technology for physical impairment. ISPO will, as it has done in the past, respond to changes and develop the Society alongside and in response to the needs of people with physical disabilities.